In October we did some tree work with our good mates, Solihull commercial tree surgeons 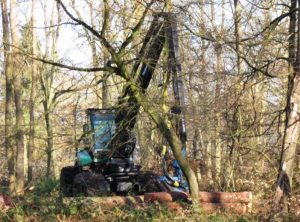 Roy and Will.  We were landscaping some old and run-down woodland that needed basically tearing down. We managed to leave some of the better old trees to incorporate in the new landscaped garden, but the majority had to be cleared.

You can see the type of machinery we used in the photo, from our fleet of garden machines that we find so useful for everything from ditch clearing to supporting trees while we chop them down.  Tree removal guys are awesome with such machines and they had the site cleared in a couple of days. Now that’s out of the way, we can get on with landscaping the entire plot, which is a big job for us.

The area amounts to around four and half acres, of which about half was formerly scrappy woodland. People think of trees as sacred sometimes, but there’s a limit to what can be done with poor species that sprung up of its own accord and really has no merit. There’s always something that can be salvaged from such woodland, but most of it has to be torn down to make way for some serious landscaping.

On this site there had been little in the way of woodland management and the trees weren’t suitable for coppicing  Solihull is a beautiful place and our client figured her plot deserved better treatment than a ropey old wood. So we undertook the landscape job and planned to plant new trees to replace the old and make features of them.

Some of the species we used were huge willows, which are pretty fast growing, along with trees that will mature to statuesque specimens like oak and ash. Fruit trees were also part of the plan, with old apple varieties chosen for their flavour and to preserve these old types for generations to come. Alongside the apples were planted plum, cherry and almond trees, which all have beautiful blossom in the spring and will produce abundant fruit within a few years.

The whole thing has been a wonderful project to work on.  It has turned out even better than expected, with a natural feel to the garden which extends the house into the countryside surrounding it. Where there was a poorly fenced paddock and neglected woodland, now stands a carefully planned yet informal garden. It leads the wanderer gently from the formal patio area to the countryside belong, so it’s difficult to determine where the garden ends and the uncultivated country begins. That’s what we wanted to achieve and we’re all very proud of our efforts.

The client is happy too, which of course is what really matters, especially as she’s paying our wages! 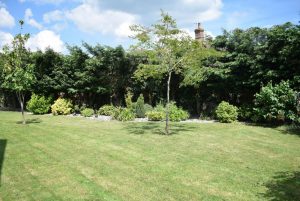